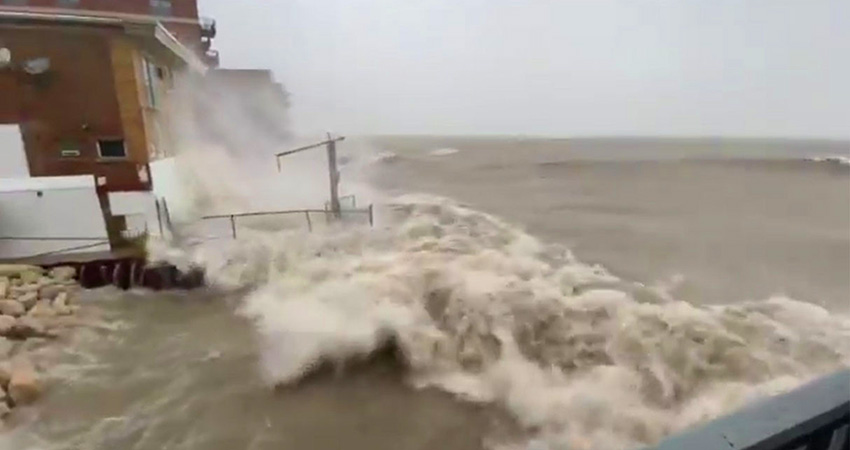 In general, temperatures in the Great Lakes basin were closer to historic averages this last week, with a warming trend in the basin the last few days. A moderate amount of precipitation fell late last week, while earlier this week proved to be quite warm with daily high-temperature records broken in Chicago, IL and Green Bay, WI on June 2nd. This upcoming week is predicted to be slightly cooler than last week, with temperatures sticking closer to their historic averages. Rain and thunderstorms are predicted for Friday and we may see another storm system across the basin during the middle of next week, followed by sun and warm temperatures later in the week.

Monthly mean water levels continue to be near or above record high levels across the Great Lakes. These near-record high water levels have been a result of persistent wet conditions that have existed over the past several months to years. Water levels follow a seasonal cycle where water levels rise in the spring due to increased precipitation and enhanced runoff from snowmelt. In the fall, the lakes generally decline due to an increase in evaporation as temperatures decline, and cold air moves over the relatively warm lake waters. We refer to the combined effect of precipitation over the lake, evaporation from the lake, and runoff to the lake as Net Basin Supply (NBS).

This past winter the Great Lakes basin experienced low ice cover with the maximum total ice cover peaking at 19.5%. Over the past decade, there have been two other winters, 2012 and 2017, which also had ice cover below  20%. A common question is how a warmer winter marked by low ice cover will impact water levels in the future spring, summer, and fall.

[JUNE 5] Lake Superior’s June 5th forecasted level is 6-inches lower than it was a year ago, while the June 5th forecasted levels for Lakes Michigan-Huron, St. Clair, and Erie are 7-, 2-, and 1-inches, respectively higher than last year’s level. Lake Ontario’s predicted level for June 5th is 23-inches below what it was at this time last year. The projected June 5th level for Lake Michigan-Huron is 5-inches above its highest monthly average level for June. A month from now, Lakes Superior is predicted to be 2-inches higher than its June 5th projected level, while Lake Michigan-Huron and Lake St. Clair are predicted to be 1-inch higher, and Lakes Erie and Ontario are expected to be 1 and 2 inches, respectively below their June 5th expected level.

[APRIL 8] Water supply to the lake during April was above average due to above-average precipitation and below-average evaporation. Lake Michigan-Huron is forecasted to surpass or tie its monthly mean record-high levels every month from April to September. In addition, water levels over the next 6-months on Lake Michigan-Huron are expected to remain 4- to 14-inches above last year’s levels and 34- to 36-inches above its long term average (LTA) levels through September.

[MAY 15] Forecasted water levels for May 15th are projected to be 7-inches and 2-inches, respectively, above the level at this time last year on Lake Michigan-Huron and Lake St. Clair. Lakes Superior and Ontario are expected to be 5- and 14-inches, respectively, below their levels of one year ago, while Lake Erie is expected to be near its level of a year ago. Projected water levels for May 15th on Lakes Michigan-Huron and St. Clair are 2- to 3-inches above their highest monthly average water level record for May. By June 15th, water levels are forecast to rise 2-inches on Lakes Superior and Michigan-Huron and 1 inch on Lake St. Clair. Lakes Erie and Ontario are forecast to remain relatively steady over the next month. 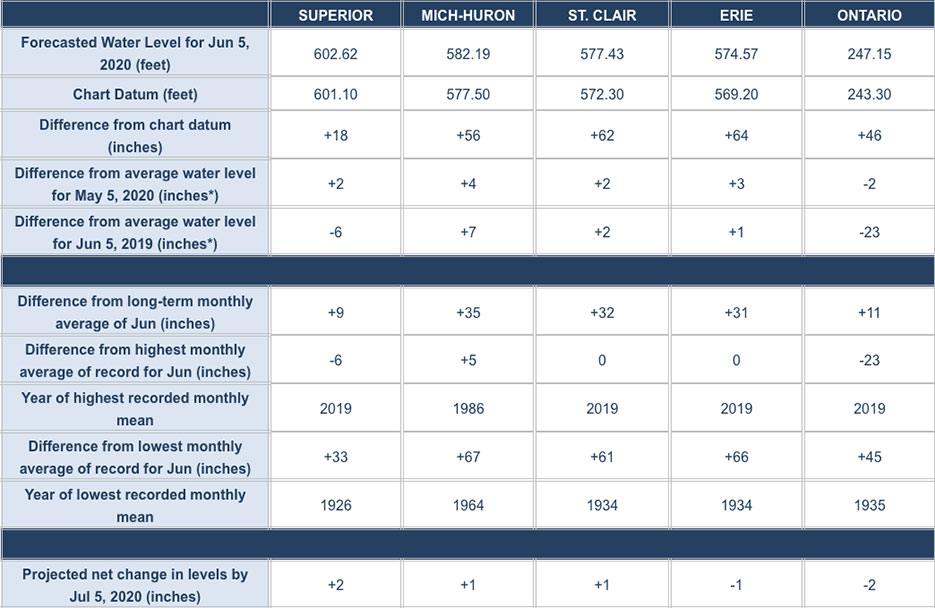 Subscribe to our newsletter and stay up to date with our latest news and deals.